You are here: Home / Essays / My Exotic Epiphany 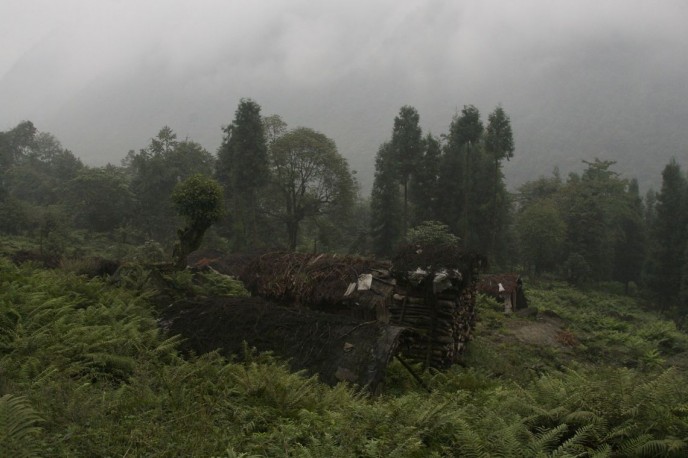 Today, as I was carting loads of firewood from the woodshed to the house through the yellow-stained gum of half-melted snow, I was reminded how good and profoundly circular life can be.

While bemoaning the recent climatic assaults on our garden, and belligerently filling my wheelbarrow, I heard a most curious noise. Fearing I had disturbed a winter home of our native Douglas’s Squirrel or even a mouse attempting to survive our lead-weighted temperatures, I paused to find its source.

Outside the shed, in a super-size-me slush of stubborn precipitation, were two birds- a European Starling and our native Varied Thrush, together noisily gnashing the fleshy fallen fruit of the Dove Tree, Davidia involucrata. It is a tree of rockstar status. 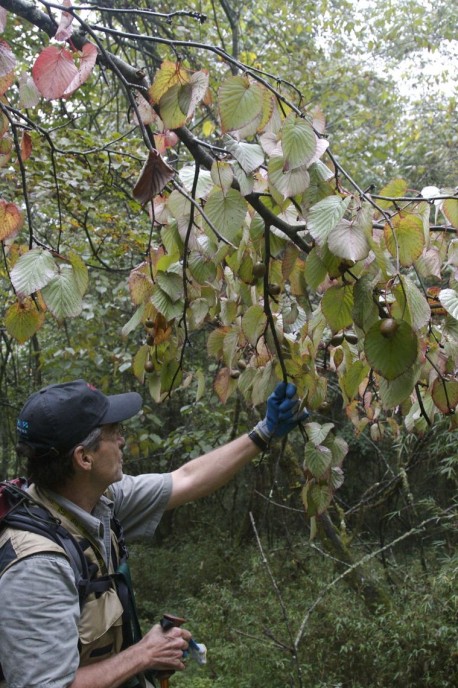 During the past two weeks, we have worried over the birds of our garden. Our peanut feeders (Chesnut-sided Chickadees and Stellar Jays) and thistle feeders (Pine Siskins) were continually topped up, while our community feeder of seed and suet (European Starlings, Pileated Woodpeckers, Red-winged Blackbirds, Northern Flickers, Hairy Woodpeckers, Western Towhees, Western Song Sparrows, Dark-eyed Juncos) was never empty. Dog-food was put out for a pair of Puget Crows that are still craftily wary of our intentions, cracked corn for our beloved covey of California Quail and a sugary nectar was kept heated, 24/7, for our resident and tiny bits of feather and bone known as Annas Hummingbirds. After the fruit of Viburnum orientale (collected in Turkey in 1999) and a Cotoneaster from Vietnam were stripped bare by Robins, I boiled raisins and scattered them below the shrubs where they would search for one final bit of fruit.

I have mourned the damage to the garden at Windcliff. My specimens of Aloe striatula, and other succulents, possess a sickly water-soaked pallor. The leaves of too many shrubs- having never been encouraged to shut down operations by an extended mild autumn- remain defiantly attached to their stems, like really ugly children not wanting to leave home. Acacias and Grevilleas have been splintered prostrate by weighty snow. It is visually offensive.

Yet, this evening, while gathering firewood (cut from our native stands of Doug Fir and Big-Leaf Maples) and during my momentary pause to determine the source of a simple, plaintive call, everything seemed quite correct. In fact, it appeared almost spookily uncloaked in level upon level. A European Starling (non-native but always welcomed to the feast) and our handsome thrush who is too shy to come round our table proper, were together feasting on the fruit of a fabled tree I had just observed and collected during an extended stay in western Sichuan, PRC. More germane, and of greater providence, was the fact that when I saw it, at last , in the rightful place of its nativity, Davidia was being harvested by tribal farmers for firewood.