You are here: Home / Essays / Anybody Want a Peanut? 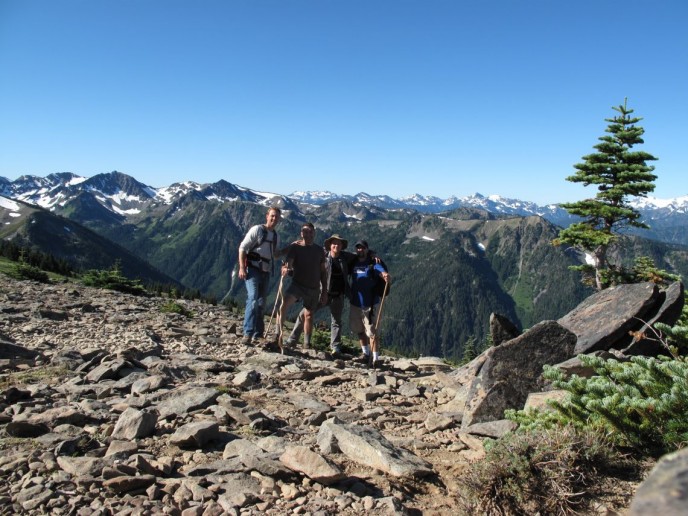 Inconceivable, in a Princess Bride sort of way.

I am just back from a three day hike into the Olympics to escape the heat. Escape the heat in the Pacific Northwest, he says? Preposterous. “Inconceivable,” as performed, spitting in indignation by Vizzini (Wally Shawn) in the movie ‘Princess Bride.’

With three dear friends, I hiked the Seven Lakes Basin loop, a 25 mile round-about to the High Divide and back again to the Sol Duc River valley. Two of us, along with my partner Robert, had participated in the first Indianola Triathalon on the day prior. At 6 a.m. the following morning, I was off to damage my knees further still.

Westley: A few more steps and we’ll be safe in the fire swamp.
Buttercup: We’ll never survive!
Westley: Nonsense. You’re only saying that because no one ever has. 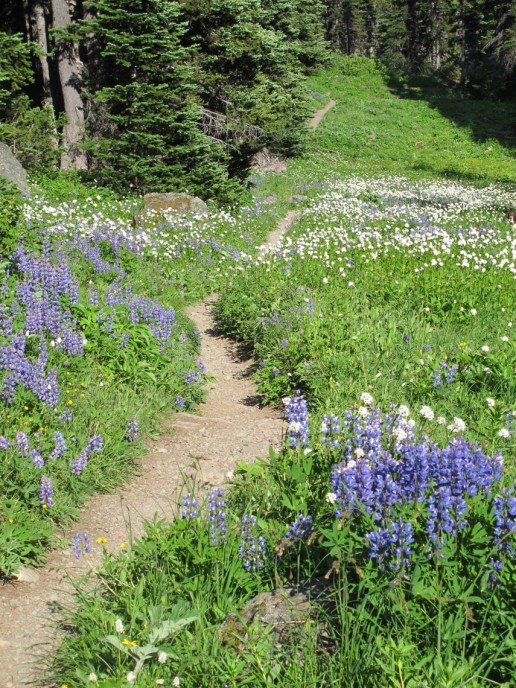 It was splendid. I wish I could transport all of you to the moments, of high voltage expanses of Indian Paintbrush (Castilleja spp.), Lupine (Lupinus polyphyllus), Delphinium(elatum), Glacier Lily (Erythronium grandiflorum), Columbine (Aquilegia formosa) as well as that cross-continental, endearing tart known as Trautvetteria caroliniensis. I will not deceive you. It was steep and hot and my muscles were weary from the beginning. We worked hard for the privilege.

Buttercup: You mock my pain!
Westley: Life is pain! Anyone who says differently is selling something.

Ok, so the timing was not perfect. The heat wave brought on a tsunami of insects. This was not a minor annoyance, which I generally consider such things, but a full frontal, arthropodic assault. As it developed, contrary to how I wish to express my respect for living things, I became quite joyful in dispatching mosquitoes and biting flies.

We ate very well as all of us like to eat very well. Collectively we suffered the weight of onions and garlic, eggplant and cabbage, in order to savor a high altitude cookoff. The effort of the hike, of course, made our meals better still. We even had a glass of merlot with our spaghetti.

A herd of Roosevelt Elk felt the heat as we did, which was both gratifying as well as fascinating. Unfortunately, not captured in this video clip was the play between the calves of this mammalian aggregation and a feisty raven which landed nearby.

We arrived home on the evening of the hottest day on record in the Puget Sound. Robert had ready cheeseburgers and fries and double chocolate shakes after a collective dip in the Sound to cool and refresh. I felt very pampered.

Buttercup: Farm boy… fetch me that pitcher.
Westley: As you wish.

Later, I discovered that the fruit laden vines of our tomatoes in our vegetable garden had been damaged by the heat.

I must repeat this….. After a collective dip in the Sound to cool (48F) and refresh, I discovered the fruit laden vines of our tomatoes in our potager had been damaged by the heat.

In the Pacific Northwest? I cannot rest. This is so weird. It is what we feared! Too hot for tomatoes? And even potatoes!

Inigo Montoya: You have a great gift for rhyme.
Fezzik: Yes, yes, some of the time.
Vizzini: Enough of that.
Inigo Montoya: Fezzik, are there rocks ahead?
Fezzik: If there are, we all be dead.
Vizzini: No more rhyming now, I mean it.
Fezzik: Anybody want a peanut?