You are here: Home / Essays / Base Camp, Summit, Retreat

On October 23rd, 2013, Shayne Chandler and I awoke at early dawn in a tent pitched at just over 10,800′ on a narrow ridge leading to the summit of Mt. Phangan in northern Burma. It was a crisp morning with a lucidity to the sky we had not yet witnessed, while across the immense sweeps of forest on either side of our campsite echoed hauntingly beautiful vocalizations of monkeys and languars. As we would attempt to climb to the top of the peak this morning and back again to our camp before nightfall, we were ecstatic by what promised to be very cooperative weather.

We had left Puta-o eight days and seventy miles earlier, accompanied by our guide, a Lisu translator, a cook and eight porters. Though the monsoon was ending, it was far from over. Every day prior, as we marched first along and over the Ziyadam River and through remote Lisu villages, then slowly into higher altitudes, rain had become falling heavily by midday. Leeches had been particularly bad, literally dripping down on us from the foliage of dense stands of the bamboo we negotiated through. More reason to celebrate the blue skies that greeted us on this very morning.

Our tents, tarps and campfire were nestled amongst an intact and vibrant luxury of plant life, the genera of which, at least, would be easily recognizable to any keen gardener in North America. Overhead towered old growth specimens of a fir, Abies delavayi, while the somewhat pendulous branches of the Himalayan Larch, Larix griffithiana, jettisoned its needles ripened to a lavish butterscotch yellow.

In the secondary layer of shrubs and smaller trees existed riches beyond compare. Close to our campfire, in fact troublingly so, grew a well balanced 15′ specimen of Magnolia globosa. The flowers of this species would belie its close affinity to Magnolia sieboldii and Magnolia wilsonii, both of which are better known in cultivation, however we had neither flower, foliage nor fruit in which to decipher its identity until photographs of its bud scars were deciphered upon our return. Overhead grew a rather remarkable species of Sorbus, or Mountain Ash, with heady tints of autumnal red gathering in its glossy green and leathery leaflets and with massive clusters of small white fruit.

However it was the genus Rhododendron that ruled these slopes. In the early years of the 20th century, while Myanmar was under British rule, plant explorer Frank Kingdon-Ward had made his livelihood among these same mountains by studying, collecting and introducing to cultivation the Rhododendrons of northern Burma. Though I do not remotely consider myself a rhododendrophile, it was through my appreciation for his work and writings that I duly noted the sheer immensity of the numbers of that genus that existed here.

Of the countless we saw, and certainly of the numerous that did not present themselves by way of flowers at this time of the year, I was satiated in seeing two in the field I had not witnessed before. As we gained in altitude, in fact to the very top of the mountain where it morphed into dwarfened reincarnations, Rhododendron arizelum began to dominate the landscape. It is among the so-called ‘large-leaved’ Rhododendrons, and in my estimation the queen of the genus. Its large and long leathery leaves, under-surfaced with a rusty red indumentum, are presented along a 20′ framework of glistening paper-pink. One could barely ask for anything more scintillating to walk amidst.

Holding fort at somewhat lower elevations was Rhododendron sino-grande, with equally substantial foliage as the former, but a saucy, acid-green rib atop the leaves to 1′ in length.

We began our ascent to the top of Mt. Phongon immediately after breakfasting on rice porridge and a couple of dodgy-tasting fried eggs. But for our guide and translator, we believed the remaining lot of our party, one of whom was seriously ill with malaria, would be content to spend a luxurious day in camp without moving. The near miraculous clarity of the day, conjoined with the fact that none in our party but our guide had been to this peak prior, must have inspired action soon upon our departure. An hour before we were to reach the peak, we were conjoined with a festive gathering of Myanmar who teased us with songs and jaunts to the top. 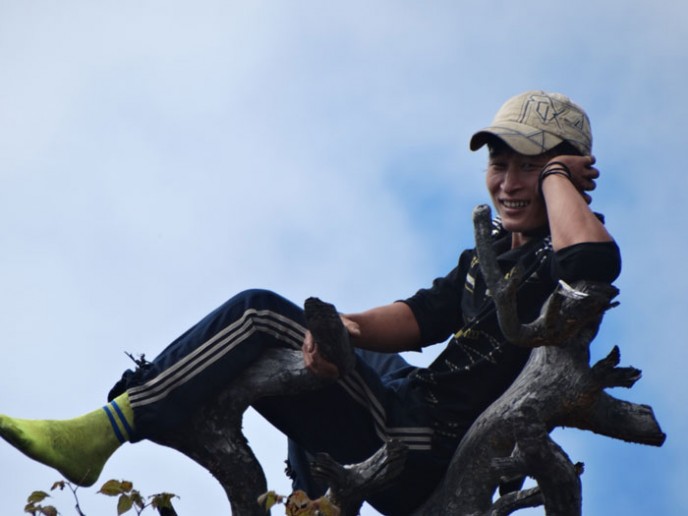 The trail snaked up and along a razor thin ridge, and though we were required to pay heed to the ramifications of mindlessly losing our footing, both Shayne and I celebrated the flora en route.   Common here were many species of Polygonatum, Smilacina and Disporum, whose counterparts are found throughout North America. Yet here the vernacular accent was thick, with Polygonatums and Disporums adhered to every trunk and tree, while the false Solomon’s Seals, genus Smilacina, soared in height to over 7′. I have indeed encountered before Smilacina oleracea in the wilds of northern India, but never in this quantity or impressive stature.

Surprisingly, the climb softened as we began our final push just before 1pm. We were now within a low growing alpine bamboo, through which its stems raked a species of Clematis that appeared, in foliage, to be related to Clematis montana. The ruby-red hips of a undetermined species of rose shone amidst the bamboo as well, with the occasional punctuation of krummholzed firs and rhododendrons piercing the plane.

Rather joyously, we gathered together at the top, wading through the tangles of bamboo on all sides of the peak to marvel in the distant views of India to the west, China to the east and the more magnificent peaks of Myanmar to the north. A fire was lit and we feasted on a cold lunch and hot coffee before a retreat to our redoubt. Our breaths momentarily hovered atop long long shadows as we slowly etched our way down slope and to our camp; our malarial-ridden porter had kept the home fires burning and begun preparations for a splendid meal. What was the food? I do not recall, other than it was swallowed with the most extraordinary satisfaction of a day well spent.

The following morning we began our long descent and ultimately our many day’s long return to Putu-o, and again through days and nights of rain. As we approached the sleepy village of Wasadam and our last night on the trek, the clouds lifted and shafts of sunlight gilded the surrounding fields of ripening rice, while in the distance rose the mountains from which we had just come, now frosted with heavy snows.