You are here: Home / Essays / Cut or Uncut 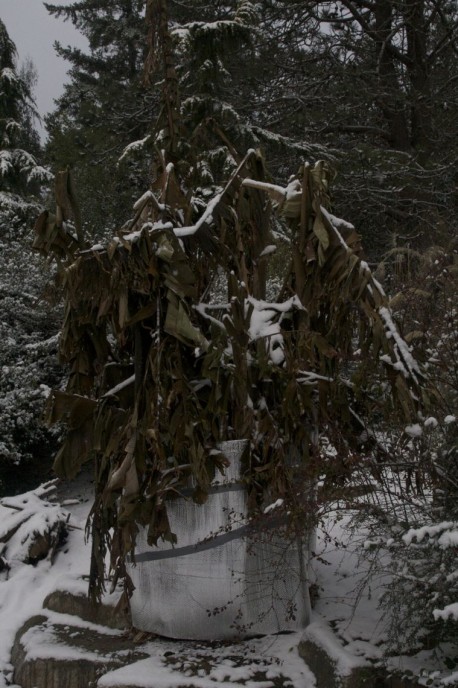 Yet another November slap to the face, 16 inches of rain capped by two nights in the upper teens. The Fuchsias and Salvias were still in blossom and the mild wet autumn had seduced a second round of succulent new growth from all inhabitants. On the third morning, the temperatures rose above freezing, the garden began to thaw and he chased a handful of Prozac with a shooter of Southern Comfort while wending through an unrecognizable landscape. Sincerely furious at this event, which is, incidentally, blamed on the Canadians as well as the Alaskans for electing a Republican governor, he has up until now boasted of this climate, claiming it one of the most munificent horticultural alchemies to exist anywhere. Once again, however, the cold truth is confronted. Forty eight hours out of an entire year has dictated what can and cannot be successfully cultivated. Now, a buggered plant collection will be starring him in the face for the next three months. And just for the record, he will never plant Echium fastuosum again. Ever.

Oh how fetching the winter garden. My assters. There is nothing pretty about a plant whose limp water saturated foliage remains attached to stems burst open like roasting chestnuts in the microwave. Despite the fact that I know, or that I presume, that much of the garden inventory will recover and that the spaces occupied by plants killed outright will soon be usurped by invasive neighbors, it is all too depressing to begin cleanup so early in the mourning process. Fortunately, this process is expedited in the loss of a beloved landscape. Most keen gardeners, having lived in Stage 1- Denial – for so long, will quickly find themselves, as I have, in Stage II. Murder. And believe me, I am never ever planting Echium fastuosum again. 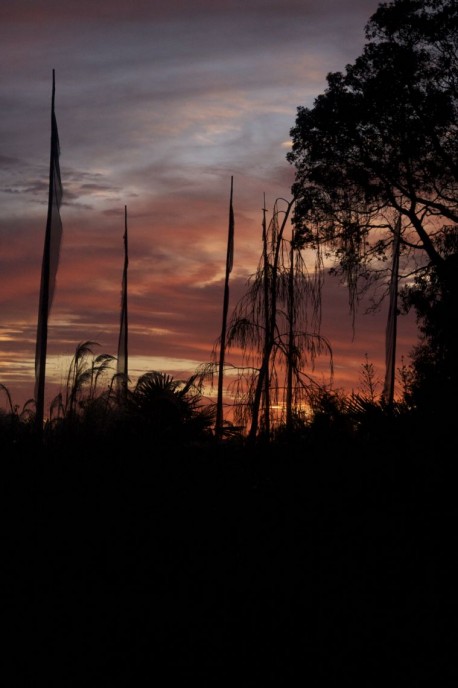 At least the Prayer Flags are still intact, and Marcia Donahue’s stone pillows, and several large rocks appear unblemished. I attempt to focus on these as I walk the garden and morbidly leer at my ‘bragging plants’, recalling summer conversations. “Oh yes, tee hee, (a toss of the nose, a sip of champagne) we consider ourselves zone 9 in our new garden. Yes, yes, Aloe striatula is bone hardy. Aloe polyphylla too. Now, what zone are you? 6b? Really??? I’m sooo sorry. Tee Hee (another sip of sparkly).” These gloating points exist now as sordid pools and rills of dribbling chloroplasts. Shovels and rakes are not appropriate tools for their disposal. This is a job for kitty litter, bleach, ciprofloxin and an industrial wet-vac. I consider putting jagged outlines of police tape around each victim.

The day I had left for Vietnam in late September, I recall walking to the bluff edge and looking to our east, to the specimen of Eucalyptus neglecta that had, in three short years, completely privatized (eucalyptalized) our property from the neighbor’s nearby house. Personally, I have no problem with neighbors. It’s people that bother me. The dense shag of its foliage provided too much sail for the girthy gales of November. The aftermath, in several distinctive piles, seems much like an entire pod of beached whales. While estimating how long it will take to remove this one carcass alone, I nod to my neighbors who are waving from their living room window. 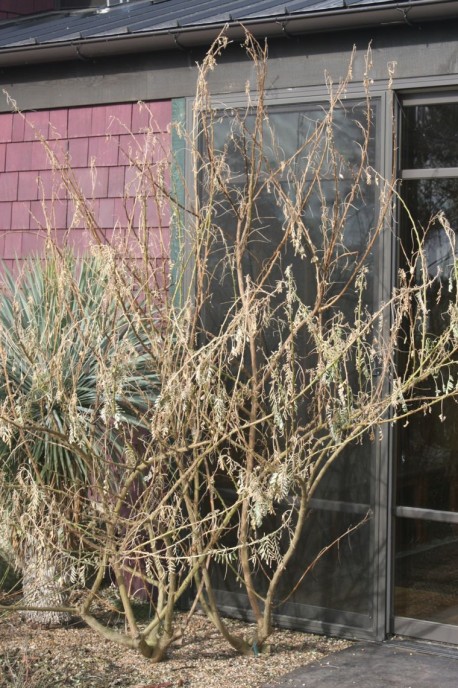 The question is, should I clean this up or simply let it be until spring? My compulsion has always been to immediately tidy, which in reality is nothing more than another measure of denial. “What damage? Do you see damage? We are zone 9.   Hell-low” With debris cleared, however, the contentedness of a job well done is replaced by the realization of precisely how depauperate a well-groomed winter garden appears. It is much like vacuuming the carpet so thoroughly that you are left only with the pad beneath.

So this year I am changing my approach. New times demand new excuses. I am going to attempt to let it be. The death and detritus will assuredly desiccate and filter down to ground level, adding some benefit, ultimately making the countless loads to the compost pile more reasonable in weight. The skeletal remains of the casualties will blanket the crowns of neighboring plants from possible frosts ahead (God forbid). The birds will have a surfeit of roosts, the dogs something to bound through without reprimand, the hoarfrost a perch on which to grow its exquisite geometry. For the moment, at least, it all seems profoundly more appealing than raked earth.

Except for the Echium fastuosum. That sucker is out of here.

Happy Holidays to all and Best Gardening Wishes in 07. We have been overwhelmed by the response to this website. THANK YOU all for visiting and taking the time and effort to correspond.