You are here: Home / Essays / Jinfoshan 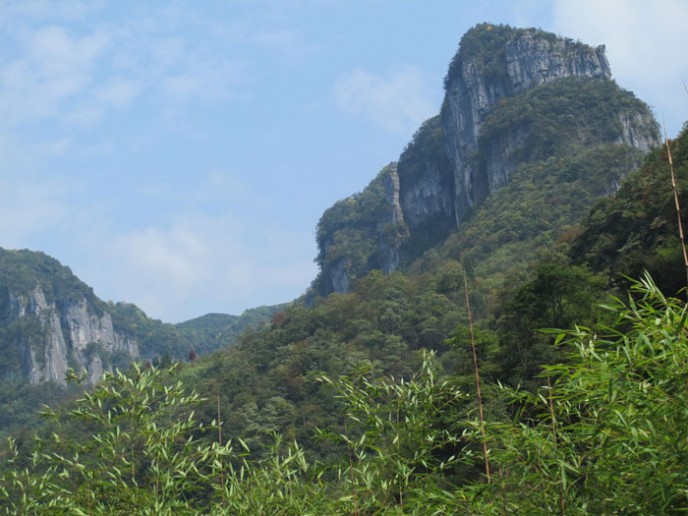 Jinfoshan, or Golden Buddha Mountain, is a dramatically gawky limestone mastiff on the southern edge of the Dalou Shan range, an autonomous region that lies between Sichuan and Guizhou (gway-jo) Province. The province itself, on the southeast border, does not possess the cache’ of celebrated cuisine or botany as do the western provinces–it can be argued unjustifiably–and is considered to be the most impoverished region in the PRC.

It is this mountain and its remarkably preserved flora (since the 1930’s) that is our first order of business for the next month in Guizhou. It has already been an exciting introduction to the plants we will encounter during our travels this autumn.

Due to China’s current economic strength and emerging middle class, the commercial development of tourist facilities throughout the country is big business, and Jinfoshan has not escaped the notice of developers. Two high drama trams carry curiously few numbers of visitors to the top where one can observe a near nightmarish assault on a once pristine forest. But those willing to put a few miles under the soles of their shoes will be treated to a dramatic landscape with an exceptional flora. 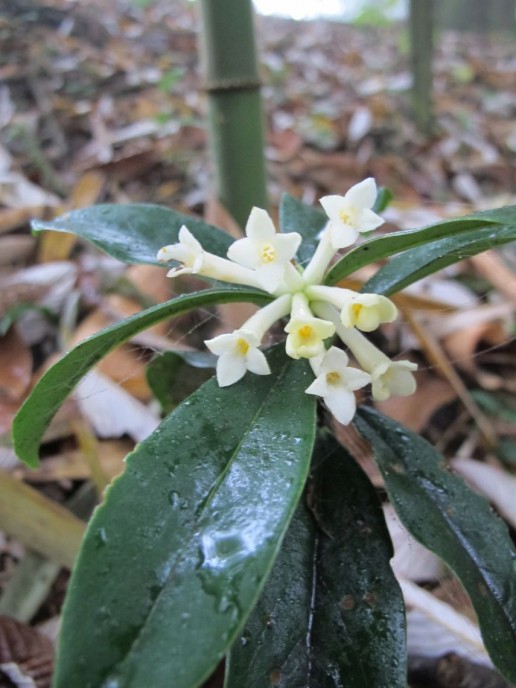 We have spent three days on Jinfoshan, exploring the southern, northern and western edges. The flora is here, as throughout much of western China, a blended concoction of Asia minor (for instance, Cotinus coggygria ), the Himalayas (Betula utilis), the Japanese archipelago (Styrax japonicus) and Austro-asia (the highly protected conifer, Cathaya argylophylla). But betwixt and between these more recognizable taxa exist a mind-bending diversity of trees, shrubs, vines, ferns and herbaceous perennials that are found here and nowhere else.

The distinctive foliage and flower buds of the genus Stachyurus caught our eyes immediately on that first day. The purple flushed foliage of Stachyurus chinensis made itself readily known however that of Stachyurus salicifolius, whose narrow evergreen leaves appear uncannily similar to bamboo–many species of which grow here in profusion–took more effort to recognize. It makes for a sensational evergreen or semi-evergreen shrub in cultivation.

Within an impenetrable thicket of garden worthy subjects that grew here, which included Corylopsis, Hydrangea, Kerria, Viburnum, Philadelphus, Lindera, Litsea, Sorbus, Decaisnea, Euonymus and Cornus, to name a few, grew an evergreen vine related to Akebia, that I have not previosly encountered.

Its very narrow, leathery green leaves held along its mildly snaking stems were strikingly handsome as was its purple plum-sized fruit that had split to reveal a sweet, seedy pulp inside. I believe this to be the little known Parvatia brunoniana. 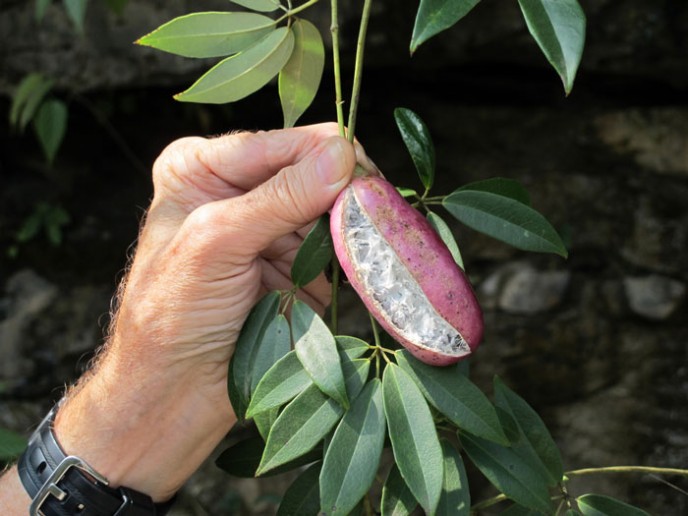 There will always be moments during travels such as these that will be discussed amongst participants of the next trip and the trip after that, and such it was and will be on that first morning when we realized the very large and handsome tree overhanging the trail on which we hiked was Carpinus fangiana. This hornbeam is vastly under appreciated in cultivation, with linear jagged-edged leaves to 8″ in length and pendulous racemes of papery-bracted fruit in autumn extending to, on some specimens, nearly one foot in length. Though we saw this species on previous trips in SE Sichuan province, its proportional grandeur had escaped our notice.

After a full day of a methodical revealing of the flora that exists here, in combination with the vestiges of jet lag, we retreated late in the afternoon via a tram on the western side of the mountain. Not recommended for the acrophobic; it was a titillating end to a sensational day as we excitedly observed the upper canopy of the forests below, which included Magnolia, Liquidambar, Sassafras, Gordonia and numerous maples.