During the 1.5 day drive to the western border of Guizhou (with Sichuan Province) and its highest peak, we find ourselves approaching that point in any trip when the creature comforts of home seemingly outweigh any opportunity to witness plants in their rightful places. With hours on jolting roads, we have had plenty of time to ponder the transitioning landscape (to that of more mountainous), the differing minority cultures (from the Maio to the Yi) and variations in cuisine (from spicy to combustible). Indisputably, in the relative luxury of our modern travel, the process of getting from place to place and often times to places that in retrospect one wishes one had not bothered with at all allows for a more profound respect for our celebrated counterparts of the 19th and early 20th centuries. Assuredly they traveled for days and sometimes weeks to get to promising territory only to find germinating disappointment.

Thus it has been with our lastest foray, driving 350 km to the west to Jiucai Ping which rises to well over 9,000′ To be perfectly honest, I have been skeptical of higher elevations for a considerable time. Gauzy air and frigid temperatures not only diminish diversity in precisely the same fashion as does traveling to both poles, but in Asia in particular, the high elevation only invites grazing of long horned gourmands that munch and mow everything to ground level.

Still, one reckons, if there are mountain peaks then there exists mountain valleys; it was this promise that we loaded into the back of the jeep along with our gear. 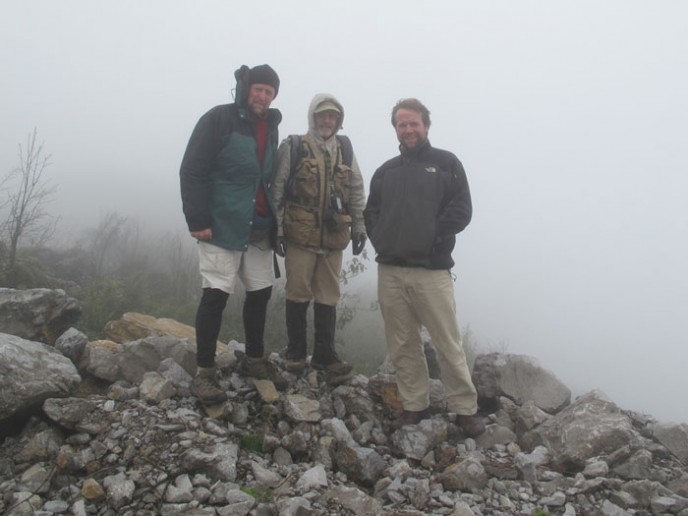 The day on the mountain was cold and windy with fog as thick as rich custard. Still, even at the base of the mountain, before we began the long series of switchbacks on its narrow road leading to higher elevations, we could recognize the signatures of highly degraded land. When we exited our vehicle at nearly 9100′, the wind was screaming above us. Later in the morning, when the fog had somewhat lifted, we realized the scream was nothing more than the enormous rotors of immense wind generators; we had taken the wrong road.

Put right, we ultimately huffed and puffed to the top of the peak through karst outcroppings and stands of a comely dwarf evergreen oak, Quercus monomotricha, that I had last seen on the Zhongdien Plateau of NE Yunnan in 2000. It is a pity that this handsome but variable species is not firmly in cultivation. Clematis montana and a Holboellia raked through the branches of this common shrub along with a dense rounded Rhododendron, Mahonia aff. and, of course, Hydrangea heteromalla and Sorbaria. 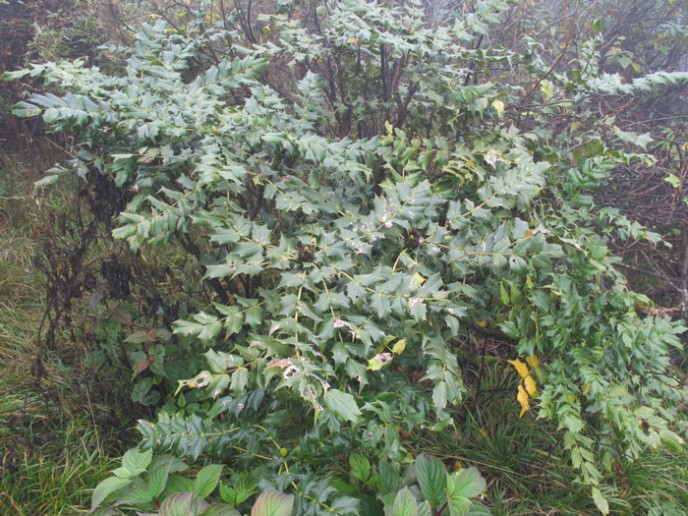 A bit later, and proving that even on days of remarked paucity in terms of titillating plant encounters, we came upon a dwarf rambling evergreen Euonymus with spiny and brilliant pink fruit. It proved to be Euonymus wilsoniana and was a first for the three of us.

On our hour’s drive to our lodging that evening, admittedly feeling frustrated and a bit crestfallen, we stopped to examine a Mahonia we had seen in flower that morning. This proved to be a handsome form of Mahonia oiwakiensis, the type of which occurs in Taiwan, and one I had by coincidence collected in Sichuan Province many years earlier. It was stunning in full flower and lifted our spirits as only good plants at the end of a long day can.