You are here: Home / Essays / Taiwan 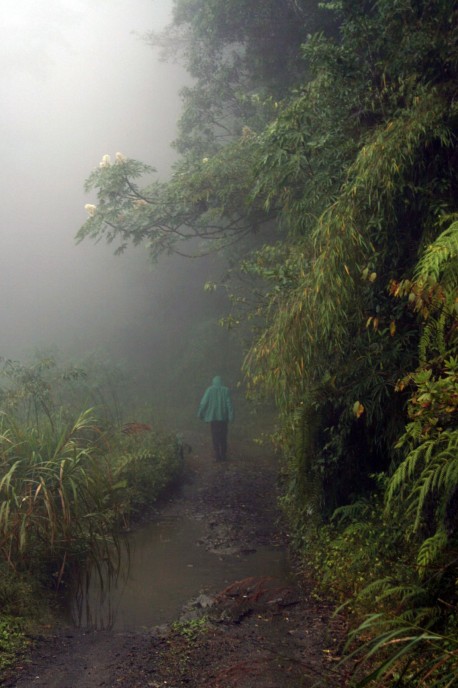 There was something horribly unsettling about the beautiful weather we had thus far experienced in the mountains of Taiwan. It was like finding a child’s room completely and utterly organized or our ill behaved dogs sitting when commanded, as if they had done something very bad or were about to. This was not the Taiwan that I knew from the past, the country whose atmospheric marinade permanently saturates your clothing and prunes your skin before you even set outside. During my last visit in 1999, seeds collected were 4 parts water, 2 parts misery and 1 part embryo.

So I took the first week here with a deliberate daily Thanksgiving, appropriate as it was the week of turkey fest, knowing full well that the irritable child that had unexpectedly said ‘I love you’ would soon again be acting out. The days were splendid and the views sublime.

In only ten days, my understanding of the Taiwanese flora has achieved new benchmarks. Whether this is sufficient to justify the expelling of more than our share of carbon dioxide into a mortally wounded mesosphere, I cannot truly say. What may ultimately be left are not the plants nor animals but what we knew of them when we lived.

These pensive thoughts, however, did not consume me during this week of pellucid autumn days. Acer kawakamii, Acer morrisonense and Acer serrulatum airbrushed yellows and reds onto a canvas of conifers and broadleaved evergreens along dramatically tilted, unstable geography of this island nation that is slightly larger than Ireland.

Last Wednesday, we hiked 20km (round trip) to slightly below the summit of Yu Shan (Mt. Morrison), the highest peak in Taiwan at nearly 13,000’. A series of ladders, chains Schefflera taiwaniana Imageand bridges took us along the south facing slopes, through virgin stands of Abies randaiensis and dense thickets of Schefflera taiwaniana to 20′ tall. The latter appears briefly between 9-10,000’ and expresses this inherent hardiness in cultivation in the Pacific Northwest.

Slightly lower was Fatsia polycarpa, similar to the better known Fatsia japonica but with more deeply lobed leaves. In the same area, now in blossom – as is the Fatsia – was Tetrapanax papyrifera. This enormous leaved, deciduous shrub provides an exotic flair to the garden and is root hardy as far north as New York where I have seen it growing at Wave Hill in the Bronx. I regret having planted it in my garden however, due to both its annoying suckering habit as well as the irritable foliar hairs that dislodge during cleanup and wreak havoc on the lungs.

The following two days, again of dubiously sunny skies, we ventured further south to the Southern Cross highway, a narrow mind-numbing winding road carved into the mountainous terrain. Completed less than a decade ago, years after the admirably progressive conservation movement had begun in this country, vast areas of virgin growth Chamaecyparis formosana, Chamaecyparis obtusa var. formosana and Tsuga chinensis have been spared the chain saw. It was in this area that we botanized for two days, intrigued by yet another evergreen araliad known as Sinopanax formosana, with bold orbicular jagged-edged leaves. On the monolithic old-growth conifers were adhered one of my favorite of the climbing Hydrangeas, H. integrifolia. It is a handsome and hardy (zone 7) evergreen species with glossy leaves adhered to its hosts by aerial roots, often climbing as high as 100’ into their crowns. It is the only evergreen climbing Hydrangea to occur in the Old World although a close evergreen ally, Pileostegia viburnoides, is also seen here, although not as abundantly. The evergreen Hydrangea often grew woven on the same host tree with Hydrangea anomala var. glabrata, while its terrestrial cousins, Hydrangea aspera subsp. kawakamii and the semi-evergreen, glossy and narrow foliaged Hydrangea chinensis (H. scandens) were commonly found in the shaded terrain below.

A tree whose sparkle of foliage was unmistakable, even from a great distance due to its reflective character, is one of my favorite broadleaved evergreens. Trochodendron aralioides has a wide distribution from the Japanese archipelago : Trochodendron aralioides imagesouthward, however the Taiwanese forms are particularly good. My 1999 collections, secured in my garden at Windcliff in Indianola, possess leaves that emerge in opulent red tones in spring and have proven to be remarkably more vigorous in growth than their Japanese counterpart. In addition, the foliage of this species from this island remains an unblemished green during the winter rather than developing the russet discoloration common in those prominently in cultivation.

As an aside, in our library at home, we have had crafted a chandelier by Kingston, Washington artist Wendy Armstrong, with each of four lamps illuminating one of the cross-over genera from gymnosperms to the angiosperms; Cercidiphyllum, Euptelea, Tetracentron and the above mentioned Trochodendron. These four monotypic taxa possess only the anciently crafted conductive tissue known as tracheids, rather than the more highly evolved and more efficient tissue (vessels) common to the flowering plants or angiosperms.

We were pleased to see the autumn flowers of two members of the Camellia family, the Theacease, which are too little employed in gardens of North America. Schima superba, an evergreen species to 50’, was plastered with white flowers presented among ovate shiny evergreen leaves, while somewhat larger white-yellow-centered ‘camellias’ were seen on Polyspora axillaris (≈Gordonia axillaris) which grew in quantity along drier, south-facing slopes. At approximately Schima superba image8,000’, we spent a sufficient degree of time gathering the now dehisced seed of this species from the road surface.

A plant family that both Bleddyn Wynn-Jones and I have shared a common interest in for numerous years is the Lardizabalaceace or that of Akebia, Stauntonia and Holboellia. Though we were fortunate to have collected seed of Stauntonia obovatifoliola in Yangming Shan, just north of Taipei, I was disappointed to find the monkeys of the island had beat us to the punch with the numerous large vines of Stauntonia purpurea. Though Akebia has proven itself too invasive for general cultivation on the eastern seaboard of North America, the evergreen taxa of this family, i.e. Stauntonia, Holboellia, Sargentodoxa as well as, from Chile and Argentina, Lardizabala (the type genus of the family) and Bouquilla, are deserved candidates for use as evergreen vines.

On drier slopes at slightly higher elevations we found specimens of Styrax formosanum, a species similar to Styrax japonica but with more reflexed petals and a beguiling fragrance. My 1999 collections of this species, now growing at Windcliff, have begun to flower and I find it very worthy of greater recognition in cultivation.

Thanksgiving Day, a holiday cold-shouldered by my traveling mates (other than a few queens, as well as the Royal Family, whatever might the Brits be thankful for?) was spent in a most austere circumstance, at a hostel in Lidou, a very small village at mid-elevation on the eastern slope of the South-Central Range. If there existed any adjacency to a sacrificed fowl for the occasion, it came in the form of a single black foot of a chicken found in the bowl of boiled cabbage brought to our table. I did, none-the-less, give my thanks that night as I climbed into my bunk. I was thankful that I was dry and I was thankful that the long black strands between my sheets were human hairs and seemingly stationary.

It was the following morning that the soup of the southeastern sky provided the portent of what was to come, a dawning of the Taiwan that I had become so familiar with. No matter, we thought, as the night was meant for restocking supplies along the coast, a bit of laundry and a filtering through a litany of electronic messages mostly devoted to Viagra and rich refugees from Nigeria wishing to deposit 50 million in my bank account. Yet the now steady rain turned to a steady downpour, to a wind-slashed coast and terrifying surf as the Phillipines guided an eager typhoon for a direct hit with this green formosa.

So it is in our car that I write this blog, held in a queue of vehicles waiting as we wait, with waterfalls and boulders cascading from the hills to the highway, hightailing it to the west and a somewhat more insulated refuge from the full petulance of this storm destined to arrive tomorrow. In the time remaining, and god willing with drier days, there will be more plants to see; Sassafras, Distylopsis, Sycopsis, Schizophragma to name a few; I will keep you posted.