You are here: Home / Essays / The Genus Dyckia 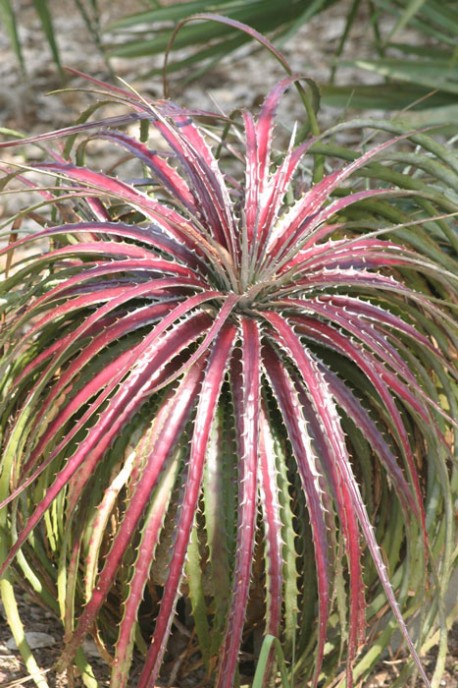 Once again, I recognize my timidity through the discovery of an unexpected survivor within the expanse of safe and boring plants growing in my garden at Windcliff, pondering why I do not more often engage in attempted murder for the sake of luminosity. It is generally through these premeditated crimes and misdemeanors that I have been rewarded by the most amazing new plants. This year, I attempted a serial murder of a genus of terrestrial bromeliads called Dyckia and found myself mesmerized instead.

The genus Dyckia, a conglomerate of 120 or so species, are found primarily in South America. Though perhaps not the most euphonious of generic names, consider the choices available to the botanist who named it in honor of this Prussian botanist; Josef Maria Franz Anton Hubert Ignatz, Prince and Earl of Salm Reifferscheid-Dyck (1773-1861). Personally, I might have gone with Reifferscheidia. But whatever.

That we can, in zone 8, consider bromeliads as potential candidates for the garden, does not come as a shock. For years, I have grown Fasicularia bicolor, from a piece given to me by the late great Christopher Lloyd from the sunk garden at Great Dixter. As I write this- the third week of September- it is coming into flower; the effects primarily through the transitioning of the central crown of foliage to brilliant shades of red. In its native habitat in S. Chile, Fasicularia grows as an ephiphytic bromeliad, though makes the transition to an adaphic environment (a.k.a. dirt) without any difficulties. It grows with Puya chilensis, another pineapple relative, that performs admirably in the PNW, if protected from gathering water in its crown during the winter. We have successfully grown it by siting it vertically on rock walls. Interestingly enough, Puya dyckioides (i.e. looks like Dyckia, tastes like Dyckia, etc.) is spectacular in our garden with stiff silvery spikehards that seems to get more dramatic by the month (I have planted this under the southfacing eaves of the house).

I first became cognizant of the comeliness and diversity of Dyckias while visiting the Prebble brothers at Texture Plants near Christchurch in New Zealand. Texture Plants is a nursery that should be on the radar of any self respecting horticulturist, hemispheres aside. Though I marveled in the colors of foliage they had achieved in hybridization work, I took scant interest in obtaining them. In the recesses of my mind, I had already stereotyped this genus as a sissy sub-tropical windowsillable.

It was not until I visited Yucca Do Nursery, in Hempstead, Texas. Plantsmen Carl Schoenfeld and Wade Roitsch have done highly commendable work introducing a enormous inventory of rare plants from Mexico southwards to Argentina. Their inspiring work has been directed towards, of course, introducing plants that will face the challenges of a Texan winter paired with the hell of a Texan summer. Seeing how Dyckias faced those extremes with such aplomb, I decided to give a few of the species and hybrids offered through their nursery a try. Two years later, and I am the first and only member of the newly chartered Indianola Dyckia Society.

A brief description of the plants are in order. Imagine the rosette of a pineapple plant, with narrower, more substantively textured foliage in tones of chocolate, red or silver, margined with abominable teeth positioned in such a manner to maximize the maceration of your fingers and toes should they make acquaintance. From the rosettes emerge slender panicles or racemes of orange to red flowers, quite pretty and unexpected.

A closely allied genus Hechtia, while superficially resembling Dyckia, is a genus found only in Mexico while extending northward across the border with Texas. It is considered generally hardier than its closely allied genus Dyckia and more winter rain tolerant, however this has not held up to my own experiences at Windcliff.

Several of species, all nicely described on the Yucca Do website, tend toward burgundy in leaf color. When these naturally isolated brethren are brought together in a garden setting and done over by passing pollinators, the resultant open pollinated seedlings can be exquisitely colored. YuccaDo offerings include ‘Red Devil’, ‘Cherries Foster’ and the exquisite ‘Cherry Coke’. Not wanting to risk all of these in the open ground the first year, I containerized the former two while throwing caution to the wind on the latter.

The in-ground specimens (including species D. fosteriana, D. platyphylla and D. leptostachya) sailed through temperatures of 18F which had followed weeks of torrential rains. These are sited in full sun in extremely well draining soils; a surrounding cement terrace assuredly acts as a heat bank. Seemingly deliberately laughing at my timorous inclination, flowers emerged in late winter on several plants and I marveled in a long display of zesty orange flowers (the containerized plants, incidentally, were sensational and quickly filled their pots with dazzling albeit nuclear-tipped foliage. I would suggest keeping them on the dry side in a cool bright condition during the winter).

Update 3/10/08: The winter of 06-07 was particularly hard on my terrestrial bromeliads promoted in the above writing though hardly what I would consider devastating. I did lose some Dyckia species, though several resprouted from the base and went on to blossom by the end of the season. Dyckia ‘Cherry Coke’ had leaf burn but has fully recovered. Puya dasyliroides, from Costa Rica, was unharmed and blossomed beautifully last summer (though I know longer cultivate it in a boggy condition as you might find it in the Paramo of Costa Rica). My collections of Puya chilensis are fine and still devilish to garden around. Ochagavia carnea looks fabulous. All three species of Fasicularia are doing just peachy.