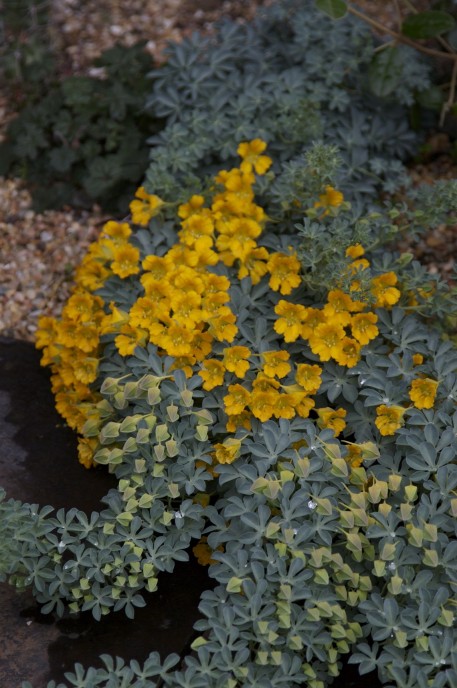 La Niña, that burly girl that refuses to let go her muscular thigh grip on our winter/spring/winter in the PNW, continues her stronghold in our climate. Robert and I, avec chiens, will retreat to the redoubt of eastern Washington this weekend to wait her out, with some botanizing, biking, enological illumination and political conversation (as they say, a good whine needs no bush). Interestingly, however, it is day length, not temperature, that rules the roost here and things push forward unperturbed.

As has Tropaeolum polyphylum. A vine that I have become particularly fond of in our garden over many years, it is a hardy Nasturtium known, in latin, as Tropaeolum polyphyllum. It is one of the tuberous rooted species found in the same genus as the more commonly come upon, aphid-ridden annual known as the Nasturtium (Nasty-Ur-Shum, as Robert is known to call them).

There are numerous species of perennial Tropaeolum, all hailing from S. America, some of which seem to be simply too beautiful to successfully cultivate while others are so rampant to deem them avoidable at all cost. Once upon a time, I sold hundreds of tubers of Tropaeolum speciosum; when in flower, the sight of its delicate chains of scarlet flowers and five fingered foliage is downright irresistible. It is a species, however, that chooses where it will grow and where it will not, though once its intention to settle down is made known, there will be no ridding of it. Indeed, I now have it growing vigorously in my present garden, in two sites, it having stowed away on transplanted shrubs or perennials from my first garden to the second. Despite its vigor, it is a tall order to consider resenting it while in blossom.

And while I could not, no matter how I tried, convince T. polyphyllum to stay put in my first garden, it has found my second to be not only hospitable, but seemingly perfect to its requirements. Growing in the summer dry soils under the southern eaves of our house, in well draining soils, the shoots emerge in late winter like bruised asparagus, eventually transitioning to a tumble of sensational steely blue foliage, along stems to 4’. In May and June, burnished buds open to expose a flurry of tubular, butterscotch flowers. The sensational showing is soon enough over however and by mid-July, the entire vignette- flower, foliage and stem- is gone for another year.

Our friends, Brian Creamer and Myrna Ogelund, are mostly responsible for my present success with this splendid species. Plant it deep, they advised, after it has gone dormant in the pots. Really deep. In fact 18” deep. Hard to believe, but true. It worked. With such depth, in well draining soils, it will be hardy in zones 6 and above, though will probably demonstrate resentment to humid climates.

Brian and Myrna produce Tropaeolum polyphyllum for local nurseries in the PNW, while Gossler Farms Nursery in Springfield, Oregon, offers it through their mail order catalogue. Adventure!