You are here: Home / Essays / Yet Again, SaPa

My fingers are purple and sore. They are purple from a species of Lindera I have just cleaned that smells like a rip off of Joy dishwashing detergent, yet born from a lovely rounded evergreen shrub with glossy linear leaves that reeks of elegance, growing in the hardiness zone of 7,000′. My thumbs are sore, and will be for several days, from two hours of inducing the birth of seed of Illicium (star anise) from its premature fruit. I am carrying about town, with said sore and stained hands, rather stylishly I am told, and from my room to the hovel where I clean my collections, a three dollar pirated rendition Louis Vitton, (more pathetically, it appears by Viet news outlets, any recent donations to the RNC has proffered the rogue hockey huntress the real McCoy which certainly will be donated to charity). In this I am carrying my computer, Ziplocs, strainers, sieves and a novel (Knowing Frank) that I have not opened for over two weeks. I am in northern Vietnam in a once small hill station transformed to Kathmandu sans high quality weed, a profoundly proud minority and a refined French cuisine. My sixth time. Tomorrow I leave for a trek into new territory called Five Fingers and I feel much like Frodo might have felt before his departure from Middle Earth to Lothlorien.

It has now been five weeks of travel and hard hikes and collections, cleaning and recording at night, and my companions are now or soon will be home again insulated by the loft of love and home fires. I miss having them here with me. Yet without them, and the delightful distractions that such company brings, I can again write. Too bad for you.

Vietnam has been again exceptional with territories and plants that had thus far remained unapparent. Our first trek pierced, foot by foot, lucid days and idyllic breezes and, at nights, skies of galactic infernos, taking us through hummocks of Hydrangea chinensis as well as what I refer to as Hydrangea indochinensis. The latter has become a holy grail, of sorts, to finally have firmly established in cultivation. In this matter, it has been stubborn. It is an evergreen species with linear leaves to five inches under surfaced with a heart rending pigment of over-ripened plum. Bleddyn and I first saw it here in 1999 and I have yet to have plants firmly planted in cultivation. This time, things will change. 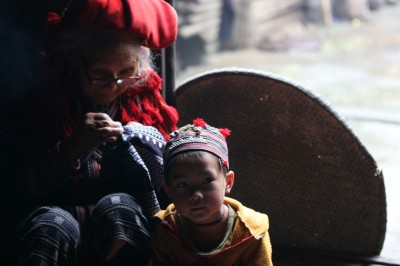 Scott, Ozzie, Shayne and I took our first voyage to Y Ty. I am obliged to Bleddyn Wynn-Jones for sorting out this location during our second visit in 2002 and who has, subsequently done important collection work here. He braved an enormously long day trip for only minutes of collections while Sue and I cleaned seed prior to our departure the following evening. He and our late friend, Peter Wharton, returned last year with rave reviews, having recollected a long forgotten epiphytic lily than seemingly sang from every moss covered tree we came upon. Far from untroubled my human culture, the plants are rich albeit slightly lower in altitude than I would hope. Loropetalum (subcordatum), Magnolia, Lindera, Stauntonia, Hydrangea, Schefflera (bodineiri), Schizophragma, Viburnum, Acer, Asarum, Paris, Arisaema and Impatines made themselves known, along with a host of subtropicals that speak in accents with which I both unaccustomed and intimidated by.

Here, in a steady rain, we hiked to higher lands while negotiating a filmy-coated water pipe that was at times our only foot old. A misstep by Ozzie pierced his right bicep that was, as unpleasant as it appeared, more palatable than a direct hit to more cosmetically conspicuous features. We were grateful it was not a more serious injury which it could have been., The rain fell hard upon our descent however we were grateful to have experienced this area on the restricted frontier with China.

On Scott’s last day, we negotiated a trail leading from Trom Tan Pass, a now ‘popular trailo that leads to the summit of Fan Xi Phan., a peak rising nearly to 11,000’ and the highest in Indochina,. The trail revealed this time yet another surprise from the trees that tower above in an indecipherable bliur of leafage. Co-mingled with the obscenely large ‘acorns’ of Lithocarpus were the more obscenely obtuse nuts of Aesculus wangii, each approaching the size of respectable grapefruits. It is a rare species of horsechestnut in Asia with imposing erect candles of white flowers in spring. I gratefully received seed of this from Bleddyn last year however a glitch at the USDA in Seattle preempted its welcome. My seed collections of this this fine species, will now, hopefully, be enjoyed by visitors to the Univeristy of Washington Botanical Garden in years to come.