You are here: Home / Essays / Luculia 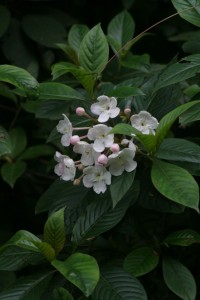 A member of the Rubiaceae, which claims such classics as the gardenia and coffee, this rather small genus of  shrubs (4-5 species) would make a splendid container candidate for the cool greenhouse in colder climates though perfectly adapted to benign gardening sites of the Puget Sound southward to the Bay Area where summer temperatures remain cool during the summer.  Because  they blossom in autumn through winter, they too are warranted a look by public conservatories as well as by the ‘pot plant’ industry.  The staff of Quarryhill Botanic Garden in Sonoma, CA, equally perplexed as to its general absence in horticulture,  report it to be fully hardy and a splendid addition to their collection. 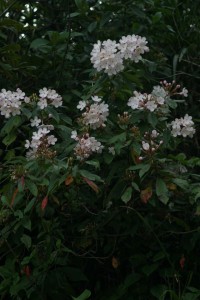 In Bhutan and Sikkim during 2005, we encountered Luculia grandiflora with large, glossy deeply veined leaves and terminal heads of somewhat nodding, ethereallyfragrant flowers of pure white through light pink carried on a framework to 8’ in height. Indeed, with all species, their perfume is carried on the wind and can be detected by the schnozzola long before a visual sighting. As with the other species, though evergreen, older leaves take on tones of reds and orange before dropping.  In Eastern Nepal, it was the splendid Luculia grattissima that was frequently seen with smaller leaves and larger more sweetly fragrant flowers.  As I am writing this from Vietnam, it is Luculia intermedia that I find prominent.  As its name would imply, its stature and leafsize are intermediate between the two  From a distance, in late October, the hillsides appear to be filled with Rhododendrons in full blossom from this shrub. Growing with members of the Melastomataceae (This family is primarily represented in cultivation by the tropical Tibuchina urvilleana with lovely felted leaves and large purple blue flowers, however here it is Osbeckia and Oxyspora that are found )  Because the habitat of these plants is primarily denuded agricultural land, I can only make the assumption that this trio of shrubs are not palatable to grazing animals. 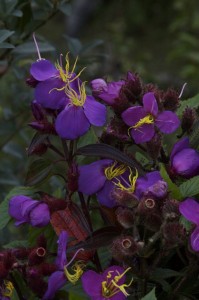 In New Zealand, a named form of Luculia grattissima called ‘Fragrant Cloud’ is offered for sale, suggesting correctly that these shrubs can be propagated by cuttings as well as seed.  Of the later, I was pleased this week to find a single specimen of Laculia intermedia with an abundance of ripened fruit.  This will be raised at the Miller Botanical Garden in Seattle for evaluation and ultimate distribution to selected institutions per their policies.